Oh hello there, good people of blogland! My name is Velveeta and I am a very good friend of Prunella's. I told her I would post something as she is too crabby to do it. You see, she had very bad news. Her car needs a new transmission, which will cost her nearly $3000. This has made her veeeery, veeeery angry, and she has been cursing and throwing things all week. And the screams! I yi yi!

I told her chill out. I said, "buck up little soldier. It will all be s'okay. S'okay? S'alright? I say this in my tiny, hilariously high pitched voice. And I smile real big and encouraging like this. See? And then what does she do but give me the finger and snatch my new weave off. It is a nice weave too. I just got it from the Britney Spears collection for 7/11. (sigh) It is veeeery hard to be a friend to someone so ungrateful but I try I really do.
Posted by Prunella Jones at Wednesday, April 30, 2008 17 comments:

Why Do I Carry So Much Freakin Crap Around In My Purse? This is my purse. It's not very big, but it's pretty damn heavy. That's no surprise, I guess, seeing how it is stuffed full to bursting with things that I really don't need to be carrying around with me. How does this always happen? Whenever I change bags I start off with nothing but my keys, wallet, checkbook, tampons, and maybe a lip balm, but somehow or the other I start to aquire things until it's as weighty as a boulder. My handbag is like my own private Sisyphus's rock, and someday it will crush me. Or at least cause major back problems.


Here is list of what I'm hauling around today besides the wallet, checkbook, cell phone, etc..

1. A hardback book. (I usually carry a book around with me at all times as I am terrified of being stuck somewhere with nothing to read. This one is called The Center Cannot Hold - by Elyn Saks and it's about one woman's struggle with schizophrenia. It's a really riveting read.)

4. Earplugs. (I bring them to wear when I go out to concerts in an effort to save my hearing, but never bother to put them in.)

5. Hair trimming scissors. (Why are they in my bag? I don't remember.)

8. Fruit flavored Mentos. (They are the freshmaker!)

14. My address book. (So that's where it was! I was looking for that sucker.)

15. A cheap bracelet from Target (just in case I feel a sudden need to accessorise).

16. Nail polish. (Why? You just know it's going to break and spill all over everything.)

18. A polishing cloth for glasses.

19. My purple librarian glasses without the case. (I lost it somewhere.)

20. A lucky blue dot torn out of a National Enquirer. You are supposed to rub it and it will bring money to you. Hasn't worked yet, but I am ever hopeful.

23. Old lists of stuff to do that I probably didn't.

24. A box of homeopatic calming drops. I don't know if they work as I've never opened the box, but it's comforting to have them with me just in case I freak out or something.

27. A little skeleton figurine riding a motorcycle. (I bought it at Goodwill a couple of weeks ago for fifty cents.)

29. 1 coupon good for $3 off dinner at my favorite Mexican restaurant (expired of course).

30. 1 little plastic grey alien figure that I bought for a quarter out of a machine. Her name is Gleep, and she often commands me to set things on fire.

No wonder my shoulders are always sore! I just weighed myself holding this thing and it is five and a half pounds. I'm an idiot. And did you notice that there are no tampons in the bag? Naturally, the one thing that I would actually want to have with me when I leave the house is not there. Yep ladies, I'm the girl that hits you up for a pad or tampon or whatever you've got when you're trying to do your business in the restroom. Sorry about that. Look at all this crud! This made me laugh like crazy. What a rotten brother. I'm glad you tube wasn't around when I was a teen.

"In the butt" is now my new favorite phrase.
Posted by Prunella Jones at Wednesday, April 23, 2008 13 comments:

There's a stye in my eye
and it's feeling quite bone dry.
How I wish that it would hit the road.
Because I can't stand the itch
my eyelid's swollen like a bitch
and it looks like it just might explode.

This stye resembles a fat pink tick.
To gaze upon it would make you sick.
Here is a letter that I wrote to it:

Go away! Go away! I've had enough of you. Why won't you leave?
I've been coddling you for days. I've soothed you with wet tea bags
and hot towels. What more do you want? You've teased me by shrinking
down and acting like you are leaving, but then roaring back the minute
I apply a little mascara and liner. Quit doing that! I need to wear
that stuff when I'm working at The Boobie Barn, as I suffer from
plain face syndrome. No one will tip a girl with no lashes and a mutant
third eyeball shooting out of her face. They are cheap bastards at the best
of times. And some jealous bitch dancer started a rumor that I had an outbreak of herpes in my eye. I bet it was Paris. I'm going to fix her good! As soon as you go away, that is. So go away!


P.S. I see my dear friend period bloat also stopped by to pay you a visit.
Say hello for me, won't you?
Posted by Prunella Jones at Wednesday, April 16, 2008 17 comments: 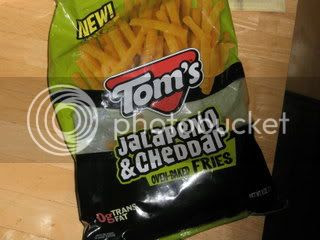 What can I say about Tom's Oven Baked Fries?
They are so very great.
The jalapeno and cheddar flavor is particulary good
which is why I overate....them.

If you try even one of these zesty little sticks
you'll want to shovel them all down your throat.
Your fingers will be coated with spicy orange dust
and your stomach will balloon out with hideous bloat.

Her Boots Aren't Made For Walking

Well, my computer problems have finally been fixed. At least I hope they have (knock wood)! Being without it for a week made me realize just how very addicted I am. Don't ever leave me again, my precious, precious interweb!

Although, not having a working computer did force me to spend a little more time paying attention to my mom, which is a good thing I suppose. My mom is a fun lady. But, good Lord, the woman can talk! I mean, yeah I'm used to her nattering on and on endlessly, but when I'm surfing the net it's easy to tune out her chatter. It's sort of like hearing the grown ups talk on a Charlie Brown television special, all "Waaammph, waaaamph awaaaampha waaaamph." Requiring me to do nothing much except mutter, "yes ma'am," every once in awhile.

But without the cushioning glow from my monitor, I was actually forced to start listening to what she was saying. Apparently she knows every single thing going on in this neighborhood at all times and she worries a lot about terrorism and gangs.

I also noticed that she leaves the house early in the morning wearing a strange getup. She has this red, cape-like poncho with slits that she puts her arms through, a Britney Spears styled newsboy type cap and giant bug-eyed sunglasses, her usual mom jeans, and a pair of boots that look like something Wonder Woman would wear if she was a senior citizen. Those boots are sassy! Way too sassy for running errands.

"Where are you going in that outfit?" I asked her the other day. "You look like you're ready to fight crime."

She just stuck her tongue out at me and said, "wouldn't you like to know, Miss Nosy."

Now this is very unlike her, as she is usually happy to give you a minute by minute detail of her daily plans. It got me thinking and soon I deduced what was really going on. I think....no, I'm pretty sure my mom might be a superhero.

This is not a joke. I am dead serious. If you watch movies at all you know that it's common for superheros to disguise themselves as ordinary, everyday people. That way they can move around easily amongst the rest of us and no one will ever suspect them. The more I thought about it, the more it made sense. Here are my reasons.

1. My mom is a very virtuous person and a total do-gooder.

2. She disappears for hours during the day, saying she's going to the YMCA to walk or having lunch with her friends but that's an easy excuse, isn't it? Who's going to check up on her? And who knows what she's up to at night when I'm at The Boobie Barn?

3. You have to see this outfit! I think the bug-eyed sunglasses give her extra strong vision powers. Perhaps she can melt steel with them too. That poncho looks like a cape. Every super hero needs a cape. I wish I could post a picture of her wearing this ensemble but she won't let me. She did, however let me snap a photo of the boots. Tell me these boots aren't made for kicking bad guy ass in cushiony comfort. They are sassy! 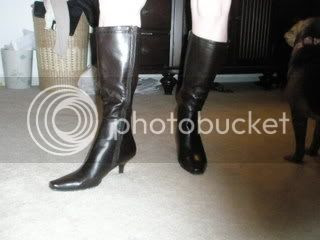 My mom modeling the sassy boots in question. She knows how to strike a fierce pose!


4. For an old lady she is very strong. She's constantly pushing the furniture around in order to vacuum under beds and dust under the TV. The one time I tried to move my couch from one room to another, I threw out my back.

5. Well, that's all I have so far but I'm sure some more will occur to me.

Just a minute ago she came dowstairs dressed in her action garb, saying she was heading out to go shopping at TJ Maxx.

"Yeah right," I said. "I'm on to you, old lady. You're really on your way to cleanse the mean streets of downtown Nashville of villiany and wickedness, isn't that right?"
And then I sang a little theme song I made up for her (to the tune of Spiderman.)

Sassy boots! Sassy boots!
She's a hottie in sassy boots.
She fights crime.
All day long.
And then at night she hits the bong.
Look out!
Here come her sassy boots.


And instead of getting annoyed with me for joking that she smokes marijuana - she never would in a million years! it's against the law! - my mom just smiled mysteriously and said, "Maybe I am. I'll never tell."

She is. Her name is probably Sassy Boot Woman.

Want to see which superhero you are? You can take this quiz to find out. I'm Catwoman.
Posted by Prunella Jones at Tuesday, April 01, 2008 24 comments: